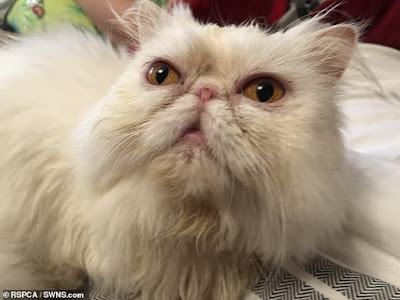 As addresses go, Buckingham Palace, The Royal Mews, London, isn't a bad one to have.

Now Flo, a white Persian cat, has fallen on her three feet to take up residence in the grounds of one the most famous buildings in the world.

She is living with the Queen's chauffeur Andy Fitzgerald whose daughter Victoria works for animal charity, the RSPCA. Flo was discovered pregnant and in a ‘terrible state’ in a dirty shed in London.
She had to have a leg amputated and sadly lost her kitten.

Her recovery was slow and the vets were unsure if she’d pull through.

Victoria said, ‘She really has gone from Aristocat to Aristocrat. She is living a life of luxury compared to where she was before, adding, 'She is getting pampered with me and my parents and she has settled in so well and gets on really well with my other pets.’

Victoria, who has worked for the RSPCA for three years has four other pets including a crossbreed dog called Oscar and two kittens she is hand-rearing.

She added: 'It is the most rewarding part of the job to see an animal who was in such an awful state like Flo was, be rehabilitated and find a loving home - and it's even better that Flo could come and live with us at Buckingham Palace.'