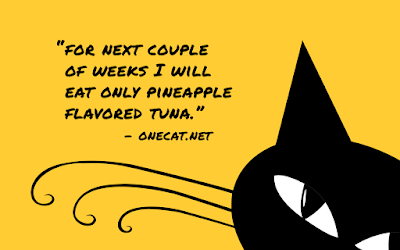 IT'S always astonishing to me how picky an eater my cat is. This, after all, is the feline that feeds on woodlice, spiders and mice and laps filthy water out of an old container in the garden.

Present her with a bowl of perfectly good cat food and she will look at me as if I am trying to feed her rat poison. Sometimes it's a brand and flavour of food she has been happily tucking into for years. All of a sudden Miss Picky decides she doesn't like it any more.

I can put fresh food in her bowl and she will eat half of it. However, 10 minutes later the remaining half is no longer palatable, apparently. Cue another look that could curdle milk.

Which reminds me. Milk. She happily drank small saucers of milk (the one that's for cats) for the first seven years of her life. Now she won't touch it. Present her with some milk and cue a look that could instantly freeze boiling water. 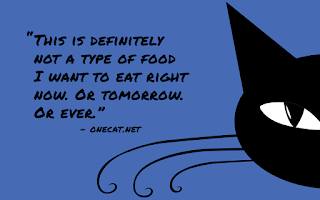 However... settle down with some expensive Brie you bought at the farmers' market and there she is at your side batting your arm with her paw as her big amber eyes plead with you. "Just a little nibble. I'd love a little taste. Mmmm, you know cheese is my favourite thing EVER."

She has definite "rules" from which she will not deviate - until she decides to change the rules.

Present rules include never eating any food that's on special offer (how does she KNOW?) even if it's her favourite brand and flavour; having a clean bowl for every meal; never eating the same flavour of food for more than two meals in a row; and demanding to share your fresh food like fish (although she doesn't like fish-flavoured proprietary cat food - go figure), prawns and chicken.

Yet I know that, heaven forbid, if she were forced to fend for herself in the wild she would be happily feral within a fortnight.

Below is a scientific bit - trying to explain Miss Picky's preferences:


Have a look at the book below - written by Toffee, the sassiest cat in the world!