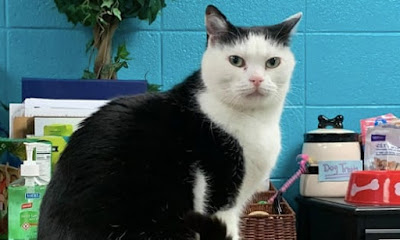 Who remembers Perdita, the cat lovingly branded "a jerk" by an animal rescue centre (story here)?

The grumpy cat has found a forever home, the North Carolina rescue centre reports. Perdita is happily (if that's the right word!) settled in Tennessee with a couple identified only as Joe and Betty.

She may have a new name, Noel, but the "challenging" personality that made her a social media star remains.


The rescue centre said: “Joe and Betty adore her and she tolerates them," adding that the stroppy cat refused to pose for the traditional adoption photograph and instead ran from the room growling.

The rescue centre received 175 applications to adopt Perdita since introducing her to the world 10 days ago with descriptions of challenging behaviours including “lurking in dark corners” and “staring into your soul until you feel as if you may never feel cheerful again”.

Her dislikes included Disney movies, kittens and the colour pink and she was described as a master of deception.

“We thought she was sick,” said the centre. “Turns out she’s just a jerk.”

The rescue group hopes to capitalise on the publicity by finding homes for other animals in its care, including Edgar, a rotund orange tabby who shares an affinity for “reaching out and touching someone”.

Perdita’s internet stardom looks set to continue, with an Instagram account set up to chronicle the next chapter in the life of the fractious feline. Here: https://www.instagram.com/perditas_journey/