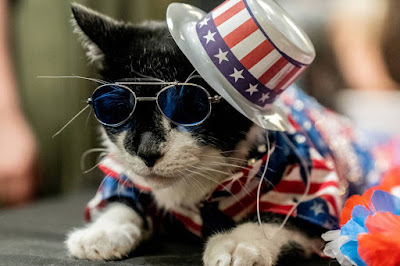 Feline fashionistas were on the catwalk for a very special show. These magnificent mewdel moggies were taking part in the Algonquin Hotel's annual Cat Fashion Show in New York.

The event, which is held to raise funds for the Mayor’s Alliance for NYC’s Animals, was called It's A Small World and had a multicultural theme.

The cats were impressive in their custom-made outfits created by professional pet fashion designer Ada Nieves. As befitting their status, they didn't have to walk but were carried down the catwalk by their owners! 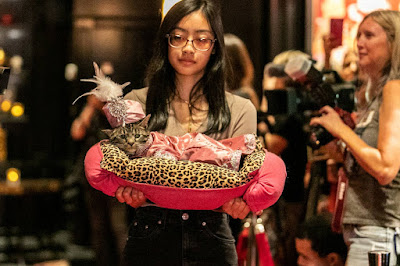 Among the gorgeous cats was  Sakie, who represented India in a millennial pink turban. More macho was a Lederhosen-wearing Sphynx called Canoli.

Then there was Balboo (pictured at the top), a black and white cat dressed in everything left in the bargain bin after Fourth of July. Wearing an American flag-printed coordinated pyjama set and an Uncle Sam top hat, Balboo side-eyed cameras from behind his blue aviators. 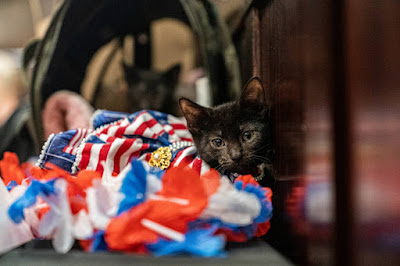 Another American patriot was a cat called Figaro who wore a pearl-embellished flag dress. 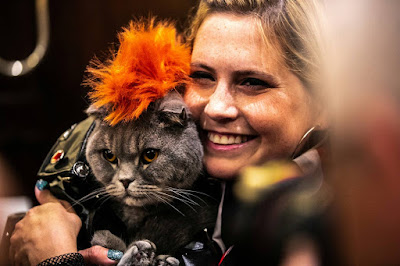 Cat influencer Thunder Folds Cat channelled British punk in a ginger mohawk and leather jacket. The Scottish Fold cat was one of the feline celebrities on the night, modelling for its 53.5k followers on Instagram. 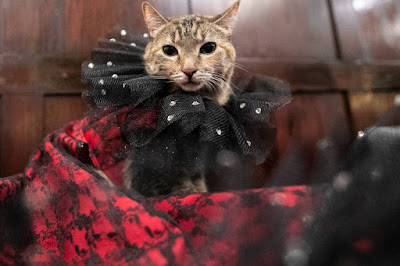 Meanwhile Mrs. Parberry posed elegantly in a flamenco dress with a sparkling oversized ruffle collar. The look was accessorised with a floral hat and she posed calmly for adoring scratches.

Designer Nieves’ design process was a complex one, as she revealed to Newsweek that she took each cat breed’s requirements into the creative process.

She explained, “For instance, Siobhan Persian cats need fabrics that will not get tangled on their long coats, while Sphynxes have no hair and need a soft fabric that will not rub against their skin.”

She also explained the casting process, saying that the cats were “selected based on temperament”.
The annual fundraiser is an homage to the Algonquin Hotel’s resident cat Hamlet VIII, who is the hotel’s twelfth Cat in Residence.

The event was held on Hamlet VIII’s birthday. The Algonquin Hotel’s tradition of having a resident cat dates back to the 1920s, with its first feline Billy. After Billy passed away in 1933, the hotel adopted a stray named Rusty who wandered in just a couple of days after Billy’s death. Rusty was promptly re-named Hamlet by actor and Algonquin guest John Barrymore, who played the role onstage.

At the event, guests were also able to adopt cats and kittens from a Mayor’s Alliance van - after suitable vetting, of course - parked outside the hotel.

To learn more about and to donate to the Mayor's Alliance for NYC's Animals, head to their website here.