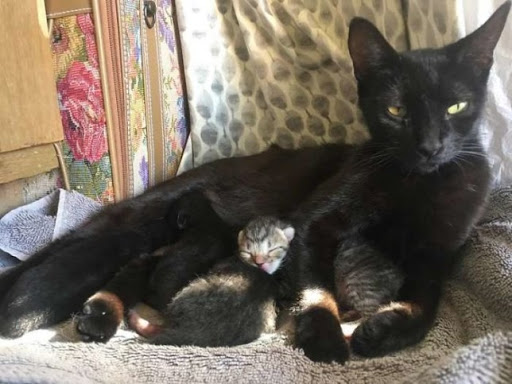 Salami and her kittens. Pictures on this page by Ida Floreak
Here’s a story that brought back memories because I experienced a similar situation.
Ida Floreak, of New Orleans, was woken at 5am by the sound of a cat meowing. She thought at first it was her own cat Bruce but on going to check found another cat on her doorstep. She recognised it as a stray cat she had been feeding on and off for a few weeks.
She had called the cat Salami and there she was, meowing insistently, begging to be let in.
Once inside, Salami continued to meow and Ida soon sussed out what was happening. Salami had become very round since she last saw her and it was obvious she was about to have kittens.
Sure enough, by 9am Salami had given birth to four babies.
In the following weeks, the four kittens all went to good homes but Salami remained with Ida and Bruce. Ida made inquiries but no one claimed Salami, so she stayed. 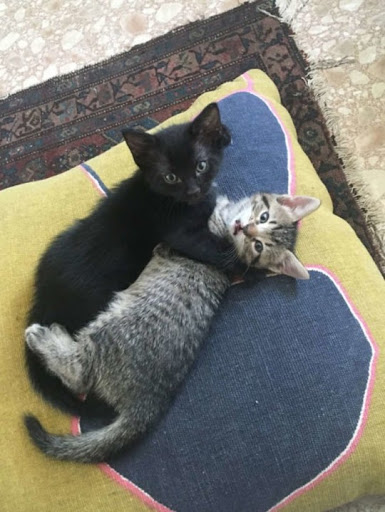 Best friends. Salami and Bruce
‘I was able to get her fixed and vaccinated, and she and Bruce hang out all day together,’ said Ida.
‘She’s adjusted really well, and is a very sweet and loving little cat. All of the kittens have gone to friends: one is in Mississippi, and the other three are all in my neighbourhood. I’m glad I get to still have a connection with them.’
As for my own experience, a few years back I awoke to the astonishing sight of a cat with three kittens making herself at home in my hall. The kittens had obviously not long been born but weren’t newborn. So momma cat must have carried them one by one from wherever she gave birth and then through my catflap into my house. My own cat didn't seem to mind at all!
We asked around and found her owners. We think that as her owners had young, noisy children, the cat had decided ours was a nice quiet house in which to keep her kittens. They took her home and she was happy to stay there. Her kittens were later all adopted.
*     *     *     *     *     *    *
If you are a cat lover - especially a lover of the grumpier members of the species, this is the book for you. Written by Toffee who, despite her name, is the least sweet cat you can imagine. The world according to Toffee exists to serve her and woe betide anyone who forgets it. Paperback on left, Kindle version on right.