R is for Rats 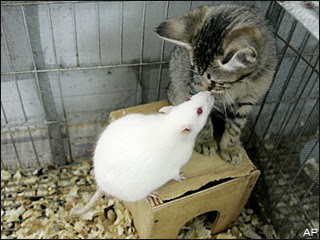 OH RATS! Who's come to play with me today?

Rats in Colombia have been trained to sniff out landmines. More than 100,000 mines are believed to have been buried by leftist rebels in the country.

Rats have proved to be experts at finding the mines - but there was a problem. The rodents were taught to freeze in front of mines, but had difficulty staying put for fear of being attacked by predators.

Bringing them face to face with their natural enemy, the cat, allowed them to stay more focused once they were released, said veterinarian Luisa Mendez, who worked with the animals.

“Here the cats play with the rats instead of attacking them,” Mendez said. “The cats wear shields on their nails so they can’t cause any injuries and as a result the rats feel comfortable playing around them.”

Col Javier Cifuentes, who oversees the project, said the rats’ success rate in mine detection was 96%. Unlike dogs, the rats weigh a lot less and therefore don’t trigger explosions.

Colombia is home to the world’s largest number of land mine victims.

My sassy, grumpy cat Toffee is also taking part in the A to Z Challenge. Take a look here: www.notsosweettoffee.com
*     *     *     *     *     *    *
If you are a cat lover - especially a lover of the grumpier members of the species, this is the book for you. Written by Toffee who, despite her name, is the least sweet cat you can imagine. The world according to Toffee exists to serve her and woe betide anyone who forgets it. Paperback on left, Kindle version on right.