Q is for Quotes 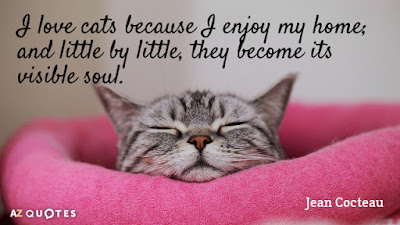 Cats have inspired many quotes about their unique characters - not all of them flattering!

There are those that emphasise their almost mystical qualities, like:

“There are two means of refuge from the miseries of life: music and cats.” – Albert Schweitzer

“How we behave toward cats here below determines our status in heaven.” – Robert A. Heinlein

Then there are those affectionate ones:

“I love cats because I enjoy my home; and little by little, they become its visible soul.” – Jean Cocteau

“Just watching my cats can make me happy.” – Paula Cole

“You can not look at a sleeping cat and feel tense.” – Jane Pauley

Then there are my favourite quotes, obviously written by people who seem to have a great insight into the feline psyche!

"In ancient times cats were worshipped as gods; they have not forgotten this." Terry Pratchett

"My cat is not insane; she’s just a really good actress." P.C. Cast
"The way to get on with a cat is to treat it as an equal – or even better, as the superior it knows itself to be." Elizabeth Peters
"Cats can work out mathematically the exact place to sit that will cause most inconvenience." Pam Brown
"Dogs come when they’re called; cats take a message and get back to you later." Mary Bly
"My cats inspire me daily. They inspire me to get a dog!" Greg Curtis
"After scolding one’s cat one looks into its face and is seized by the ugly suspicion that it understood every word. And has filed it for reference." Charlotte Gray
"Cats’ hearing apparatus is built to allow the hooman voice to easily go in one ear and out the other."  Stephen Baker
"When my cats aren’t happy, I’m not happy. Not because I care about their mood but because I know they’re just sitting there thinking up ways to get even." Percy Bysshe Shelley
"A cat isn’t fussy – just so long as you remember he likes his milk in the shallow, rose-patterned saucer and his fish on the blue plate. From which he will take it, and eat it off the floor." Arthur Bridges
One final thought:
"There is, incidentally, no way of talking about cats that enables one to come off as a sane person." Dan Greenberg


*     *     *     *     *    *
If you are a cat lover - especially a lover of the grumpier members of the species, this is the book for you. Written by Toffee who, despite her name, is the least sweet cat you can imagine. The world according to Toffee exists to serve her and woe betide anyone who forgets it. Paperback on left, Kindle version on right.