HERE'S a twist to an old tale.

A man from Manchester in the UK had to be rescued from a tree which he climbed to rescue his cat. He scrambled up there OK but then couldn't get down again. He was stuck there as the cat stared at him in disgust.

The fire service was called to rescue the man. The cat, however, refused to budge and later came down of his own accord. 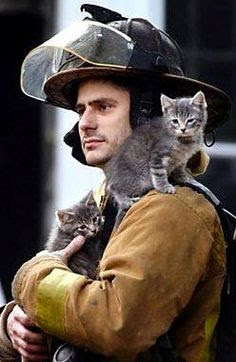 Unfortunately no pictures exist of this escapade but I have found the one above especially for my female readers. Handsome fireman and kittens - what's not to like?