B is for Birthday: How to Throw a Party for Your Cat 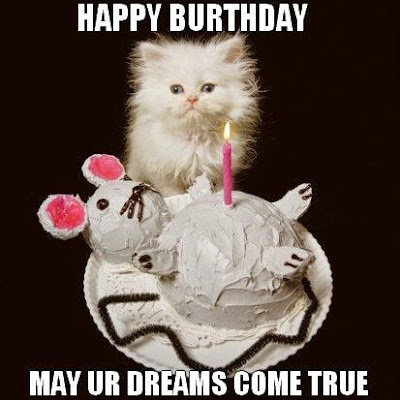 Cats like parties too and even if you don't know their exact birthdate, you can celebrate their adoptaversary. However, there are a few things you should know before getting out the rabbit jelly and Tom and Jerry Ice Cream.

Party Paraphernalia: Go to an expensive shop and spend loads of cash on birthday items like party bags, toys and games. The next day, throw it all away because the only things your cat was interested in were the cardboard boxes it all came in. 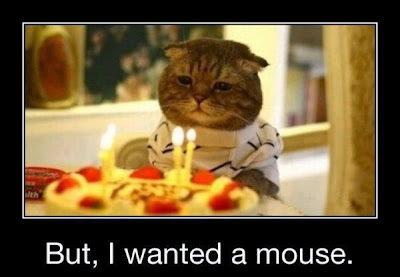 Party food: Go to an expensive fishmonger's and butcher's and spend loads of cash on top quality fish and meat. Take hours lovingly preparing it. The next day, throw it all out because your cat has filled up on spiders and woodlice and turned his nose up at it.

Invitations: Go to an expensive stationer's and stock up on gold-embossed cards with a picture of a mouse on them. Take them home to write out to all your friends and neighbours. Half an hour later, throw them all away because your cat has shredded them in a fit of pique. 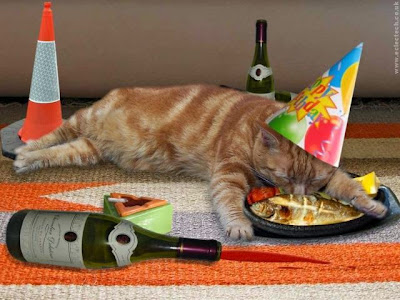 Music: Spare no expense in hiring a top band. When they turn up install them in a marquee in the garden that cost an arm and a leg to hire. Ten minutes later ask them all to go home because your cat hates the noise and is hiding under the garden shed and refuses to come out. 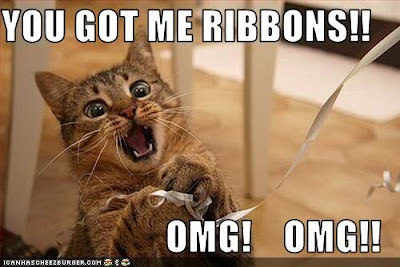 Gifts: Go to an expensive emporium and spend half a day and a month's wages picking out a state-of-the art cat toy. The next day dismantle it and put it in the attic because, apart from one sniff, your cat has shown no interest in it whatsoever.

Guests: Do ask everyone in the world you want to impress - your boss, your mother-in-law, the new neighbours - and then hide away from them for the next five years because your cat dumped a half-chewed mouse at their feet and then threw up all over their shoes.

My sassy, grumpy cat Toffee is also taking part in the A to Z Challenge. Take a look here: www.notsosweettoffee.com