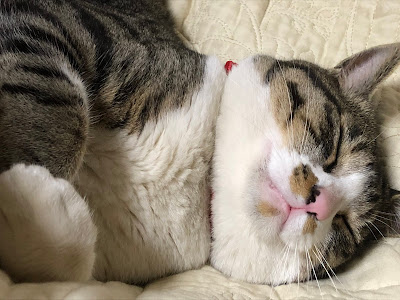 I share this information for no other reason than I read about it and found it interesting. I have no personal experience of its effectiveness, nor have I heard any evidence that it works.

All I do know is that when your pet goes missing you will try anything to try to find it. My cat once went missing for a fortnight. We put up flyers, and postcard ads in the local shops. We reported it to our local vet and to rescue centres just in case someone handed her in, all to no avail.

Then one night she turned up, much thinner than when she left but basically fit and well. To say we were happy is an understatement.

When a Japanese man's cat went missing. He took to Twitter to ask other owners what he should do. One suggestion was intriguing. He was told to talk to other cats in the area to ask them whether they had seen his pet

Sceptical at first @charlie0816 knew his only hope now was to do what others had suggested so he spent the next two days talking to cats.

He wrote on Twitter that he was told, ‘Talking to cats in the neighbourhood and saying to them, "If you see my cat, please tell it to come home" is an effective technique. So last night, I went to the local convenience store and gave it a try by speaking to the stray cats there.'

The next morning @charlie0816’s cat arrived at the front door of the house, seemingly no worse for wear and even a little larger than he was before he left.

Of course, the cat's re-appearance was probably pure coincidence. Even so, many Twitter users swore to the effectiveness of this technique.

If your cat does go missing, here's some more practical advice from pet food firm Purina.