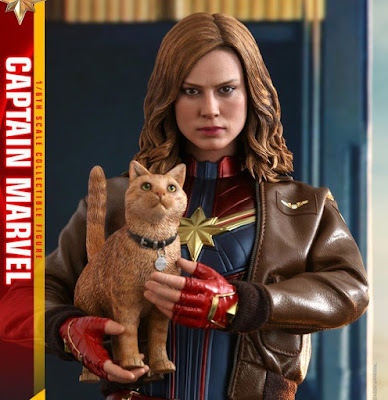 Super hero fans often want to own the action figures which look so much like the stars that play the characters. Now, though, a cat that has muscled in on the action.

Hot Toys has revealed a one-sixth scale model of Brie Larson as Carol Danvers from the Captain Marvel films. The level of detail is astonishing. She even comes with a choice of energy effects to attach to her hands that show her in various states of action. 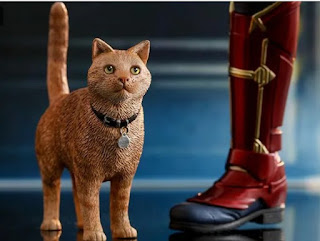 In addition there is a Deluxe Edition, whick comes with extra energy effects, Carol's rad leather bomber jacket and, the best accessory of all,  her intrepid sidekick Goose the cat. Goose's design level is purrfection itself.

But if you want to buy one you'll have to wait for a while. The Hot Toys Captain Marvel is set to come out around this time next year. There’s no price yet either, but you can expect to pay a little more if you want the deluxe version that comes with Goose.

Whatever that extra price is, it’ll be worth it for Captain Meowvel’s breakout star. 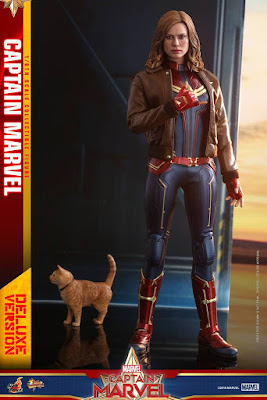 In the film, Goose is played by a real cat. Reggie is the 12-year-old feline “actor”. He was cast in part because of how expressive his face is. In addition, Archie, Gonzo and Rizzo were a trio of "stunt" cats who would fill in for Reggie at times, like when he was tired, while a computer-generated Goose was used for some of the character’s more unnatural skills (such as tentacles that shoot out of the kitty's mouth and throttle bad guys.)

“We had enough cat experience to know that cats do not ever do what you want them to do,” Boden says. So while they came into the movie with "extraordinarily low expectations," Reggie exceeded them and more. "We found that at times he was more directable than some of the actors we've worked with,” Boden says.
Take a look at the book below - written by Toffee, the sassiest cat in the world!


* Here's a blog by the sassiest cat on the internet! www.notsosweettoffee.com
*Take a look at The Best Cat Products In The World. You'll love them!