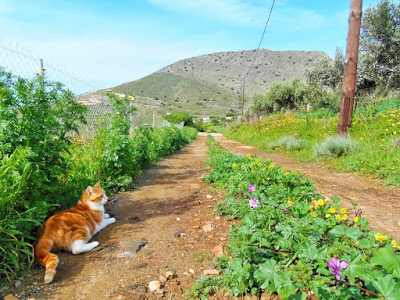 A few weeks ago I posted a story about a job looking after up to 70 cats at a rescue centre on the idyllic Greek island of Syros (read it here).

Centre owners Richard and Joan Bowell were offering the successful applicant a wage with a lovely house near the beach to live in and a car.

The story went viral and within six weeks there were nearly 40,000 applicants. Joan kept updating the Facebook post, emphasising that the job was indeed real, and clarifying that the tiny house provided to the manager would not accommodate families or pets brought from home, and that it was a job that entailed scooping poop, cleaning vomit and making "heartbreaking" decisions about gravely wounded or sick cats.

Even so, the applications kept pouring in. Now the Bowells have made their decision and given the job to 62-year-old Californian Jeffyne Telson, whose husband sent her the link to the job ad in August.

"He said, 'Jeffyne, this job has you written all over it. Are you going to wait until you're too old to try to access your dream?'"

For 21 years, Jeffyne has run RESQCATS in Santa Barbara, California, which takes only strays - the cats found roaming alleys, the kittens located behind the shed. The cats like those on Greek islands, which Jeffyne has visited three times.

"I didn't do all the tourist stuff on the Greek islands. I separated myself from the tourists and walked up and down the streets looking for the kitties," Jeffyne said. "I thought, 'There's just so much to be done here.' "

So Jeffyne sent a letter to the Bowells, explaining that she'd placed 3,000 cats and kittens in homes over the decades. Those too sick or antisocial to be adopted stay at her sanctuary; currently, it has 15 residents, including four feline leukaemia patients in their own isolated area.

"I believe that every life is precious and worth saving,she wrote in her application.

Richard said her application stood out immediately. The Bowells travelled to Santa Barbara to meet Jeffyne in mid-September, and he said that "there was an instant connection between Joan and Jeffyne - and the other way around." Jeffyne, like Joan Bowell, is an artist. She, too, has never had children.

Jeffyne said she would leave her rescue centre in the care of volunteers this winter, when it shuts down for the season, and spend several months in Syros.