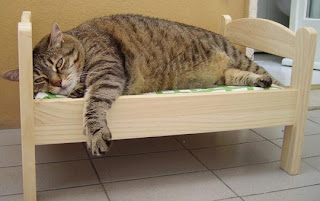 IT looks like pet cats and dogs across Britain are living blissful lives. It has been discovered that over 50% of them end up sharing their owners' comfortable beds.

The fact has been revealed via a research which was undertaken by Gala Bingo, which showed that another 49% of pet owners would much rather sit on the floor themselves than force their pets off the sofa or bed.

In addition, a further nine-tenths of pet parents would prefer to save their cats or dogs in the face of a tragedy before they turn to any material possessions.

"I've been a vet for 14 years and am still amazed at some of the things people do for their pets as we really are a nation absolutely dedicated to them," said Joe Inglis, who works in conjunction with Gala Bingo.

Some people, it has been seen, tend to take the whole thing a bit too far. 12% of pet owners actually said that they like to dress up their pets in human-style clothes. Now that's a step too far!