Nick And His Ginger Girl 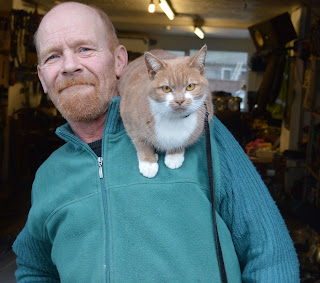 NICK Priest was at the lowest ebb of his life when he took on a poorly kitten.  A former miner who had served with the Royal Corps of Signals, Nick was now out of the Army and was having problems with alcohol.

But the kitten, the runt of  the litter from a cat owned by a friend, was to prove to be his saviour. Caring for the little scrap gave Nick something to do and gave his life meaning.

He said the cat, which he called Fidget, gave him a reason to carry on and he, in turn, nursed the little kitten back to life.

"I rescued her, and she rescued me right back," he said.

At first, she was "really not very well," said Nick, but he cuddled her in his jumper to keep her warm and she began to respond. "That's what made her survive," he said.

Fidget, now two, has grown into a happy, healthy cat and  she is a familiar sight perched on Nick's shoulder in their home town of Penryn in Cornwall, UK.  Fidget is also a bit of biker, joining Nick when he is out on his motorbike. She snuggles into his jacket for short trips or lies in a fur lined tank bag for longer journeys.

A veterinary nurse persuaded Nick to enter Fidget in the Cats Protection charity's National Cat Awards  and he has submitted entries in the Hero Cat and Furr-ever Friends categories. Nick is also making notes on his life with Fidget, in the hope of eventually publishing her story.

He has also been in touch with James Bowen, a former homeless busker whose story of a cat turning his life around became the book A Street Cat Named Bob: And How He Saved My Life. This year the story is being made into a film.

He said: "I told him 'I don't want to steal your thunder but my cat goes on motorbikes, and she's a ginger girl. We've had some adventures, and she's only two years old."

James emailed him back and said: "You carry on, mate."

Just like Bob gave James a reason to get himself off the streets and to get help for his drug addiction, Fidget gives Nick the impetus to turn his life around.

"I've got someone to be responsible for now," he said.


Never miss a funny picture, mad video or hot cat news. Subscribe to That's Purrfect and we'll email you every time the website is updated. All you have to do is pop your email address in the 'subscribe' form in the panel.