How Tell If Your Cat Is Cross With You 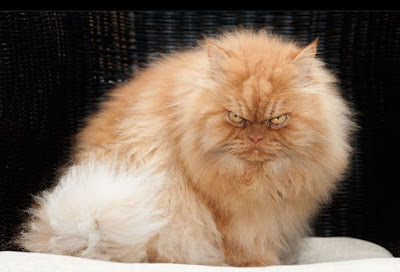 Some cats are grumpier than others but even the most laid back kitty occasionally has a grouchy moment.

So if you want to avoid the sideswipe or the horrible hiss learn how to tell if your cat is mad at you.

1. They Give You The Cold Shoulder
If your cat's mad, they might leave the area you're in, avoid getting near you, and simply watch your movements from afar. Cats just like to have some space if there's something bothering them or stressing them out, or if their routine gets messed up.

2. They Swish That Tail
A cat's tail will show you how they're feeling, and if your cat is mad, it's going to show. "A tail that’s flickering back and forth quickly or held low can indicate an irritated cat," explained iHeartCats. "The hair may also stand up on an angry cat’s tail." Look out for a tail that's lowered instead of standing up tall, and swishing back and forth, as this shows kitty is annoyed — and if their tail starts thumping, their mood has probably escalated from annoyed to angry, and they could become aggressive. This is usually a clear indication that kitty isn't happy with you or the current sitch, so steer clear. 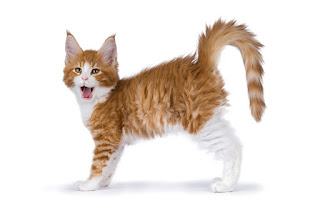 3. They Signal With Their Ears
Cats use their ears to express emotions. If your kitties' ears lower down or flatten out against their head, it could mean they're in a mood. A bad one. Steer clear of heavy pets until they've perked up again.


4. They Exhibit Fur-ious Fur
The fur all over their body seems to stand up straight, totally puffed up, and they may even arch their back to appear even larger. Fluffy and adorable as they may look, this is a clear indication that they're angry or in fight mode. Conversely, they may instead try to make themselves look smaller by crouching their body low to the ground and hunching their shoulders. If you notice either of these body movements, it's good to make sure there are no other factors around that could be triggering this response, such as another animal outside the window or another animal in the household who may be antagonizing them.

5. They Growl And Hiss
If your cat is growling or hissing at you, they're probably unhappy with you or what you're doing. A low growling sound (or a deep, guttural vocalization that is different than a meow) is usually a clear indication that your kitty is cross with you or the situation. Same goes with hissing: It's basically a cat's way of saying "lay off," so listen to them. Once a cat starts making these vocalizations, stop whatever you're doing — petting, playing, etc. — and give the cat some space. 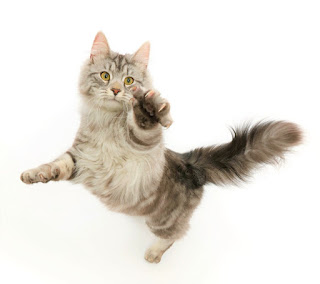 6. The Paw Swipe
Almost every cat person has experienced a paw swipe while petting their beloved kitty. Whether it's a gentle bat of the paw or a claws-out, blood-drawing scratch depends on the cat and how angry they are, but in either case, it could indicate that your kitty wants you to step off and give them some space.

7. They Give You The Evil Eye
Cat faces can be expressive too. Does your cat ever just give a look and you know what it means? Sometimes you can tell your kitty is angry with you because they're watching you and giving you that subtle but identifiable angry eye. Another indication that they could be angry is that their pupils dilate — although this could happen for a wide variety of reasons, so look for other factors in conjunction with that before you assume your cat's mad at you based on pupil size alone.